All makes of European and American classic and vintage cars. Find over 1000 reviews, plus tips on servicing, tuning, restoration and modification.

WHY SHOULD I BUY ONE?

Because they are like nothing on Earth! The ride is phenomenally good, as is the handling if you’re brave enough. Even standard length cars have enough space for four six footers, and they’re so smooth. CXs were used to film horse racing for years due to their ride, and with the state of roads in 2015 this smoothness is vitally important on tarmac too!

WHAT CAN I GET?

Pretty metal-bumpered Series 1s and colour coded Series 2s with an even madder looking dash. Most engines were derived from the DS, with 2.0, 2.4 and later 2.5 variants of the four-cylinder engine. Diesels were also available, as was a 2.2-litre PSA engine from the 505 car toward the end. CXs were available in two lengths, standard and Prestige; the latter spun from the warehouse on wheels Safari estate as a luxury limousine for heads of state. Many had DIRAVI steering, which self-centres, though early base spec cars had no assistance at all. It’s worth noting that GTi, unless a turbo, is simply a 2.5-litre saloon to TRI spec and not a car with genuine sporting pretensions.

Spooky. It’s cliché-ridden to say it floats like it’s on a magic carpet, but that’s exactly how a CX feels. The steering is fingertip-sensitive, and the brakes are far sharper than anything else in period. The thing which lets the CX range down is its range of Traction Avant-derived engines, with the exception of the later CX22. While they are a bit thirstier, the CX makes the most sense as an automatic either in petrol or diesel guises – after all, why shift your own gears in a spaceship? But the thrift of the diesel might appeal, and remember that when new, the clatter from the bonnet was just as alien as the rest of the car!

Citroën has a policy of stocking spares for cars up to 15 years old, but anything older leaves you in the hands of the specialists. Fortunately, there are many, who understand these DS replacements well and love them dearly. But that doesn’t mean spares are necessarily easy to find. It’s worth cultivating the friendship of fellow fans and building your own spares stash, too. Provided you can keep it going – which isn’t as hard as it might sound – they’re huge fun and so serene, you’ll want to use it daily – and indeed you can.

Citroëns are properly cool, and right now we think the CX may be the coolest (what about the GS SM?-ed) of the post DS classics. It’s a shame that DIRAVI never caught on as it should, which is a real loss to the majority of UK motorists who drive regularly in town. Buy the best you can and look after it, and you’ll not look back owning a CX.
CX25 Prestige Automatique (1985)
CX25 Limousine Turbo 2 (1988)
Peugeot 205 Génération (1998) 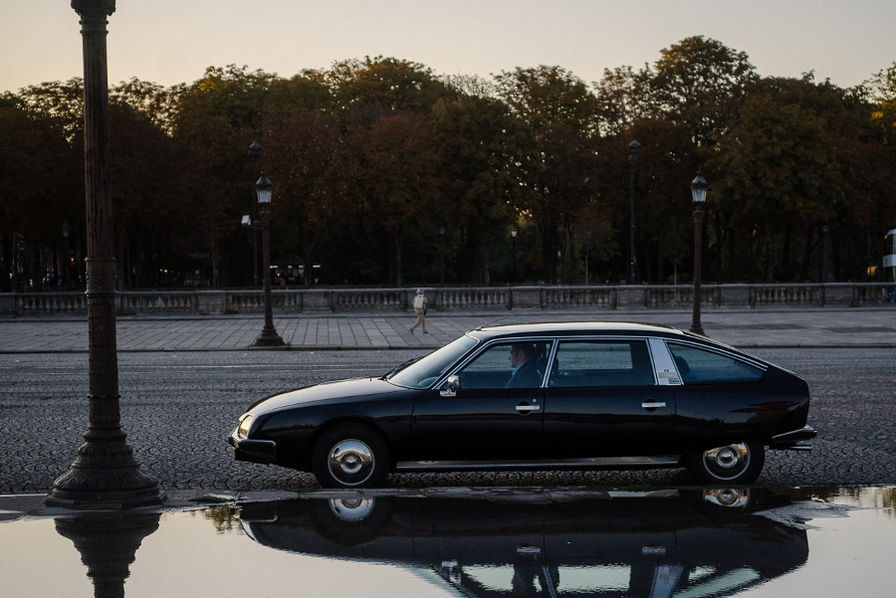 
Using his artistic knowhow, the award-winning French interior designer Tristan Auer has exquisitely ‘tailored’ a Citroën CX Prestige for guests of the landmark Hôtel de Crillon in Paris to use as a luxurious courtesy car around the City of Light…
The Hôtel de Crillon on Place de la Concorde at the foot of the Champs-Élysées is a last bastion of Parisian luxury and style. That’s why back in 2017, Paris native Tristan Auer, who was among the celebrated pool of designers responsible for the refurbished palace’s lavish interiors, thought it needed a suitably luxurious and stylish courtesy car in which its guests could be chauffeured around the city and told the story of the hotel before they’d even arrived. In translating the artistic and sensory principles he adheres to in his day job into a quintessentially French Citroën DS for the prestigious hotel, his Car Tailoring project was born. 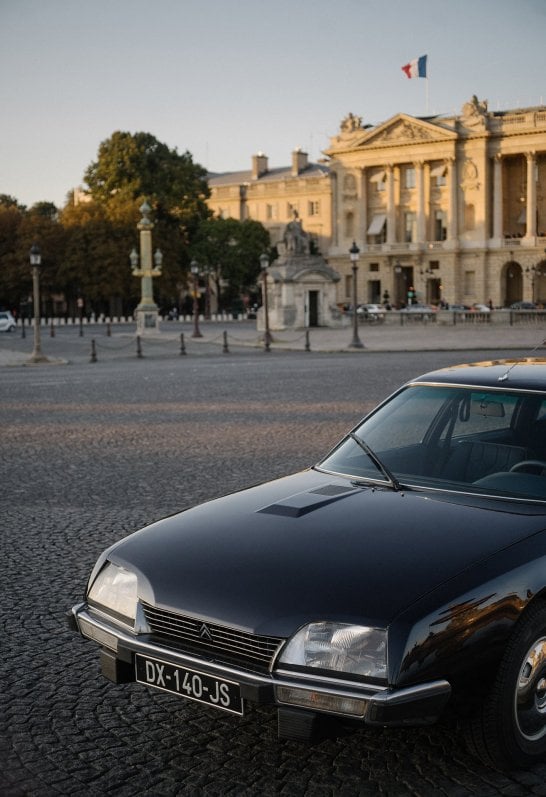 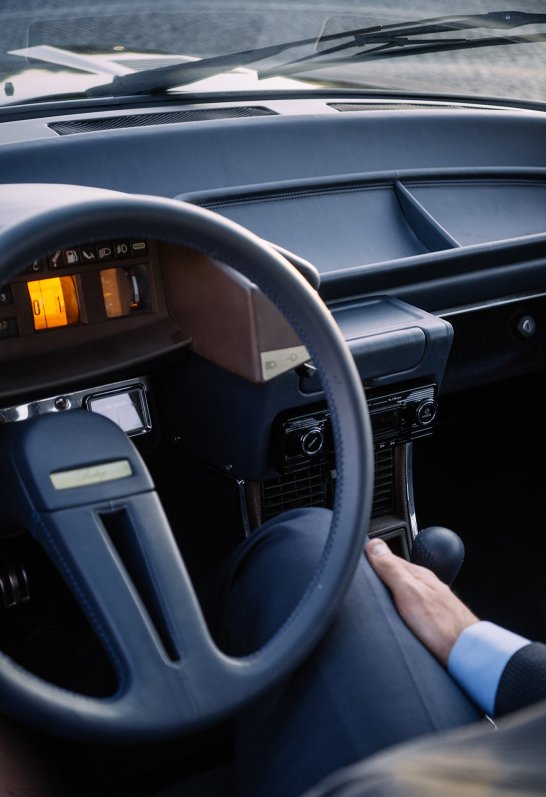 “You don’t so much look at a car’s interior, but you feel it,” Auer explains. “Luxury these days means made to measure; something that’s been created as an extension of your personality and that you want to keep forever. We pick certain clothing because of the style and the feeling and fluidity of the materials – a car is a layer that surrounds you in the same way so why not treat it in a glamorous and sensual manner?” He references the great coachbuilding era before the War, when only a chassis and engine was delivered and the (well-heeled) customer had free reign to create the bespoke car of his or her dreams. “It’s a new way of thinking about consumption and it’s sustainable, too, as you’re buying to keep, not to sell.” 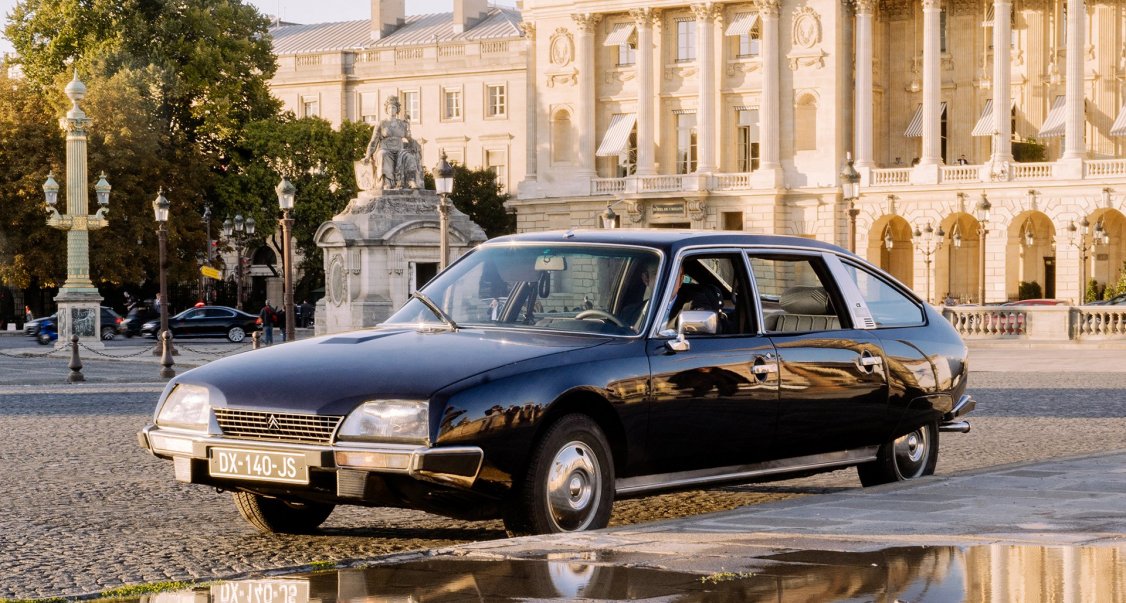 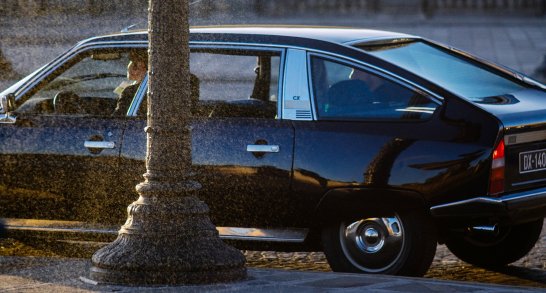 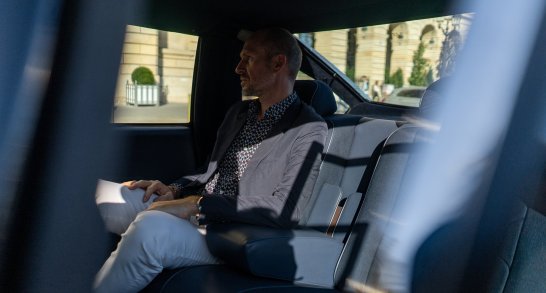 Despite initial reservations from the hotel’s owner, Auer’s DS, which incorporated an amalgamation of plush leather, wool and cashmere, went down so well with the guests that it became something of a mascot for the palace. Tiny models of the ‘Goddess’ were even put in guests’ rooms before they arrived. Citroën soon caught wind of the concept and in this, its centenary year, approached Auer with the

of creating another Parisian courtesy car. “This time I proposed the CX, which the hotel was initially against because it’s not as iconic as the DS,” he continues. “But I think it’s a very interesting car in terms of its shape and design, and it resonates with Parisians especially because our former president Jacques Chirac used a CX around the city for a long time.” 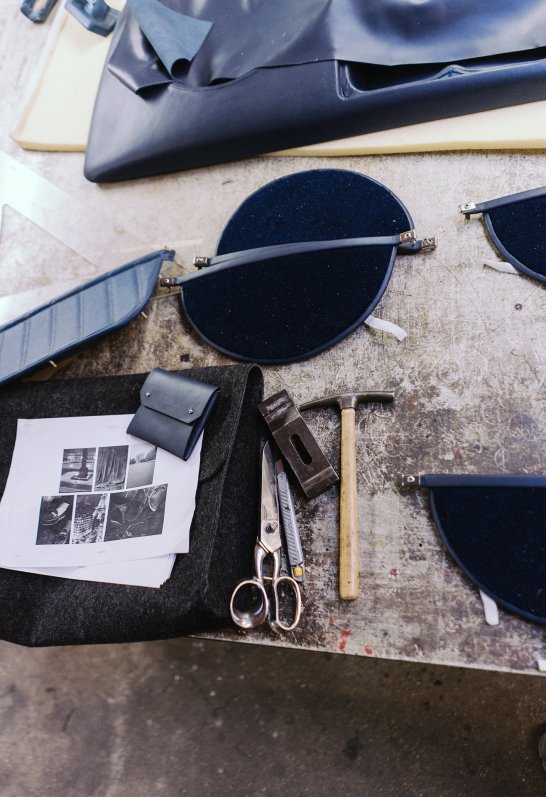 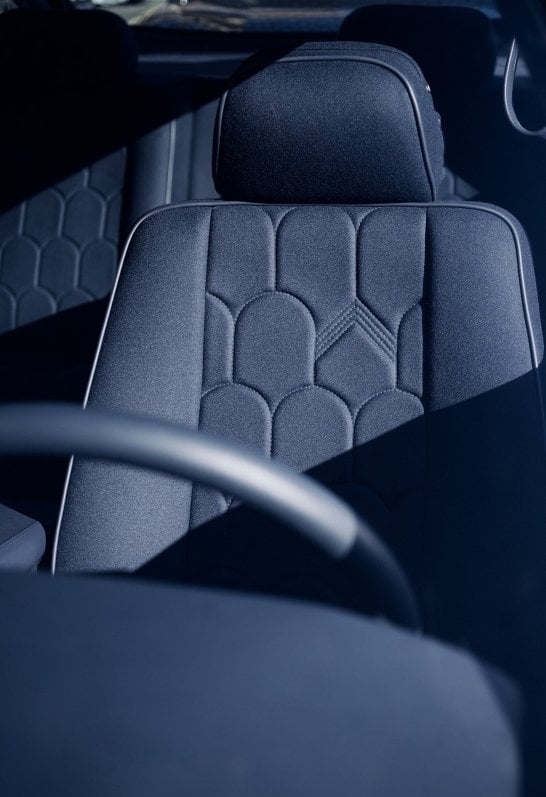 Equipped with a midnight blue Citroën CX Prestige from the late-1970s and a generous budget, Auer set about transforming the quirky saloon into a rolling embodiment of the City of Light. “When you look at the CX again, you realise it’s a true spaceship and a masterpiece of design,” he recalls. “For this reason, I chose not to do anything to the outside and instead focus on the interior. I chose a harmonious selection of materials in order to make a statement of luxury – I wanted the car to feel ‘right’ for a glamorous evening at the opera, when you’re very well dressed.”
Much like the chic hotels, boutique fashion stores and rock stars’ houses for which Auer has designed the interiors, his CX Prestige has been turned into a multi-sensory experience for its occupants. Your feet sink into deep-pile carpets, the wool headrests are like your favourite pillow and could send an insomniac to the land of nod, and there’s soft-to-the-touch cashmere thoughtfully put in places you don’t see but you certainly feel. “When you arrive at your destination, you don’t want to get out!” Auer also incorporated a dice-like pattern on the seats inspired by the Hôtel de Crillon in addition to Citroën’s signature chevrons. The craftsmanship is exquisite down to the last individual stitch – a remarkable feat given the myriad different materials used. 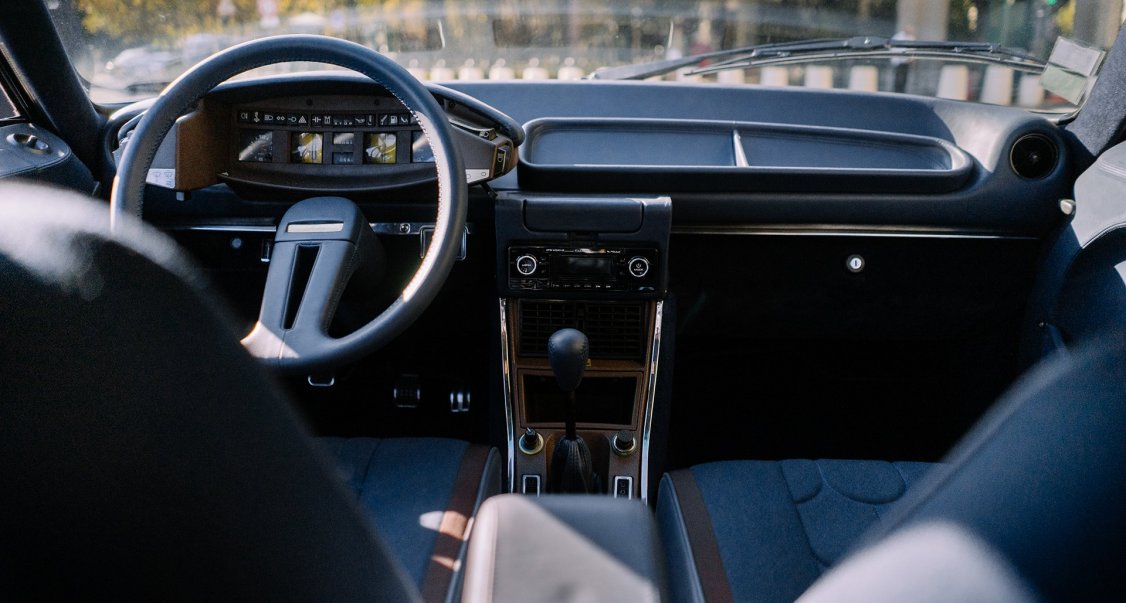 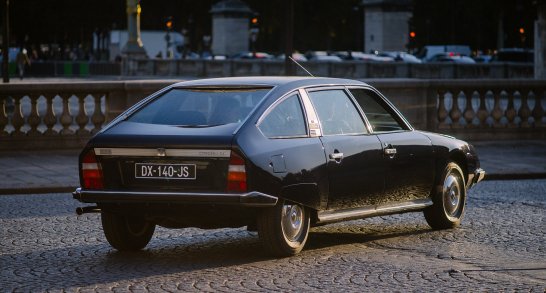 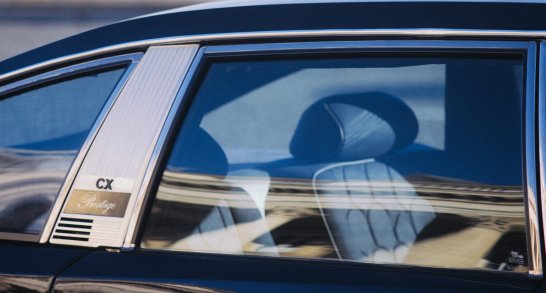 For Auer, this car is a bid to relight Paris’ love affair with the car. “The relationship Parisians have with the car nowadays is a disaster. We all use the same black Ubers with black interiors and tinted windows – I honestly feel like I’m in a coffin when I ride in one. In this car, it’s very bright and the windows are clear. Suddenly the relationship between the occupants and the city is much more open and intimate and it makes people behave themselves a bit more. It’s also a chance to be a bit arrogant and show off your taste for luxury. Parisians are arrogant, so it’s perfect!” 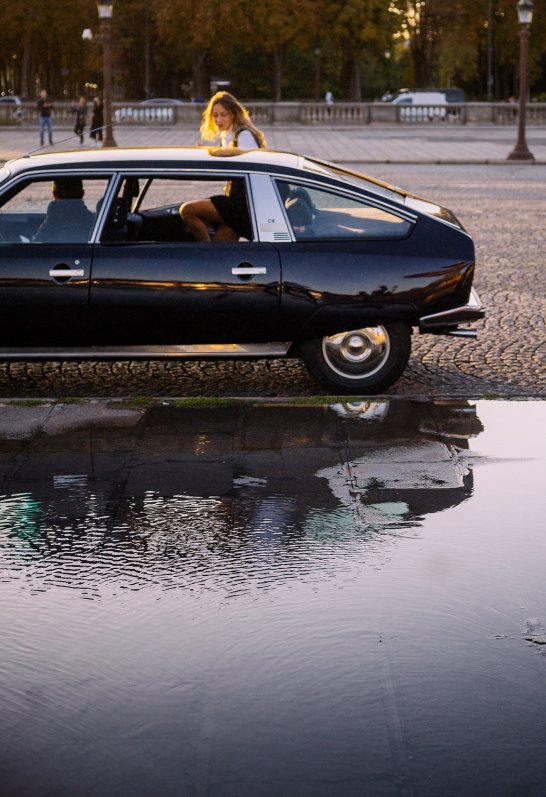 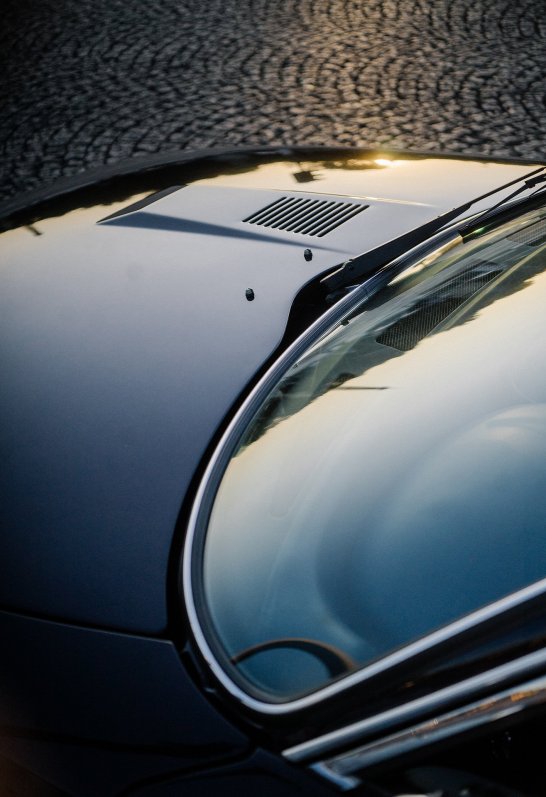 Citroën has kindly donated the ‘tailored’ CX Prestige to the Hôtel de Crillon to use for the next three years. So, if you’re planning on visiting Paris, we’d thoroughly recommend a stay at what is the best-preserved and most important palace in the city, if only for a ride in the most stylish and comfortable taxi in town. Furthermore, Citroën was so pleased with the CX that it’s commissioned Auer to create another car for another important anniversary in 2020. All will be revealed at Rétromobile, so watch this space.
CX25 Prestige Automatique (1985)
CX25 Limousine Turbo 2 (1988)
Peugeot 205 Génération (1998)

Περιοχή
Paris in the sixties